“There’s a snake up there Daddy!”

No one even bothered looking up. Sam, 8, had been attention-seeking all day…

The family was sitting down for lunch in the converted barn, open sided with a BBQ and dining area. I’d just been telling the kids about a snake skin I’d just found. Sam chose that moment to tell us about a snake he could ‘definitely see’ right now in the barn rafters above the dining table.

I rolled my eyes. Sam is 8. If we go sea fishing, he will catch a glimpse of a shark every five minutes. If we go for a walk in the woods, he’ll have spotted a couple of bears before lunch.

“Yes Sammy, I’m sure you think you saw a snake.”

“He’s right you know…” said one of the other adults present who had finally given in and glanced upwards. A split second later everyone jumped away from the table, chairs crashing to the ground. All the scene needed was a lone spinning plate like in a Scooby Do cartoon when everyone exits stage left, with ghost/monster in hot pursuit. 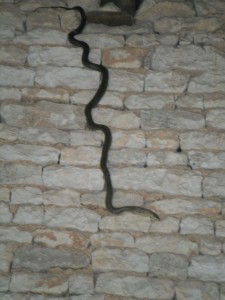 The snake was after this… 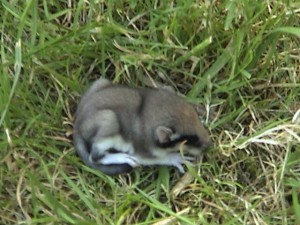 The dormouse had been squeaking loudly from a small crevice in the stone wall of the barn. Inevitably, he had attracted the wrong attention.

When the snake eventually slithered down from the rafters to the crevice and its tasty nest, the dormouse leapt out and hit the floor with a bit of a splat, where he remained stunned for a few minutes. I looked at the kids expecting tears, but they weren’t nearly as upset as I thought they would (should?) have been.

Unfortunately, the dormouse then resumed his foolish, mournful squeaking. We all watched fascinated as the snake paused, listened, re-assessed, then re-acquired its target and changed direction.

We debated what to do. Allow the snake his deserved lunch? or rescue the cute little critter. But rescue to where? There was a snake in his home nest and as his cute little bandit eyes were barely open we knew he wouldn’t survive long on his own.

While we argued what to do, a cat shot round the corner, pounced without hesitation and swallowed the baby dormouse whole.

“Yeah, Dad, you should have believed me.”