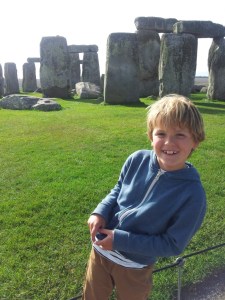 My children are well used to being dragged to various historic monuments. In the UK, I only need to see one of those little brown road signs pointing off to something ancient just a few miles off our planned route and we veer off ‘to explore’. The older the monument, the better…

No matter how strong the howls of protests are from the back seat, (and from my wife too) my responses are the same: “I’m the driver, I get to choose.” “C’mon, we’re never going to come this way again!” but my strongest argument is surely: “It’s good for them. Heritage is important and they’ll appreciate it one day!”

Maybe they will. But never for the reasons one hopes. It’s difficult to know what the children are thinking. Probably: “Wtf has dad brought us to now?”

Once I showed them some Bronze Age burial cysts and they immediately jumped into them. Similarly, abbey and priory ruins which I adore for their haunting beauty, sense of loss and endless stories are simply just tailor-made  playgrounds packed full of climbing and jumping opportunities and plenty of loose stones to wobble on… 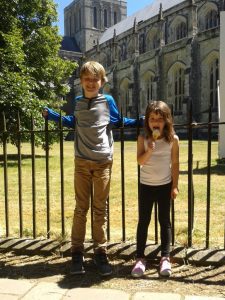 Sometimes our children do just get it however. If the building is big, stunning (intact), dramatic and colourful. If there’s lots of visitors and an atmosphere of hushed reverence, then they really do seem to appreciate that this is somehow important and worthy of respect.

For example the spectacular Winchester Cathedral steeped in beauty and history has a small army of knowledgeable volunteer guides who impart their facts and stories with such enthusiasm that my children were fully engaged for the whole visit.  I can’t thank these volunteers enough for a wonderful couple of hours of quality family time! 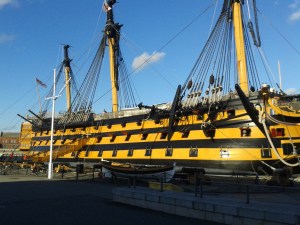 Similarly, HMS Victory clearly has the wow factor for kids and adults alike. 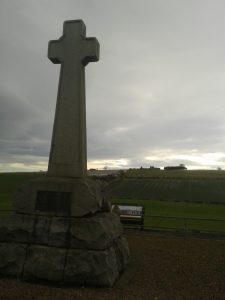 Site of the Battle of Flodden, Northumberland

But cold, wintry battlefield memorials not so much.

Battlefields can be a stretch for kids even if they are vaguely aware of the battle’s historical importance. As far as my kids were concerned the site of Scotland’s terrible defeat at the Battle of Flodden had some great hills to run down but that was about it. Dad’s impassioned lecture, fresh from Wikipedia, fell on unimpressed ears. 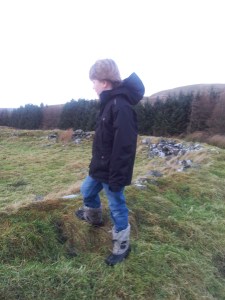 I tell the children this pile of stones near West Linton in the Scottish Borders is the remains of a Bronze Age house and ask them to imagine living in the Bronze Age in tune with nature, catching their own food, making their own tools, building their own round houses from stone and wood and surviving without an Xbox. (Although the archaeological record online says this particular pile of stones is probably just an enclosure for sheep, Bronze Age graves were found less than a mile away so Bronze Age people did live around here. Honest, guv).

“It’s not very high is it dad?” was his response. True enough. Archaeology you can’t jump off, what’s the point of that?

So although the kids enthusiasm for some lesser historic monuments doesn’t always match their appreciation for that of a huge working cathedral, a small pile of stones in a field is still somehow important. I don’t always manage to impart to the kids why they’re important. They were important to those who came before us, which makes them important. It just does. It’s heritage. So it must be good for them.

And, anyway, I’m the driver so we’re going. Stop whinging and put your coat on.

One thought on “Dragging the kids to historic monuments…”